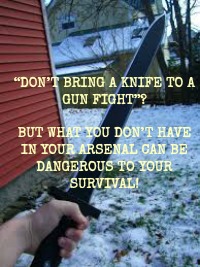 “DON’T BRING A KNIFE TO A GUN FIGHT”?

BUT WHAT YOU DON’T HAVE IN YOUR ARSENAL CAN BE DANGEROUS TO YOUR SURVIVAL!

What would you say if I told you that…

The second amendment is under attack. The government believes that gay marriage and the right to abortion are fixed in the Constitution — buried somewhere, you’ll just have to trust them — but the black-and-white guarantee of the right of individuals to own guns is a big Lie.

Better yet, what would you say if I told you IT WAS A FACT.

A fact that the government doesn’t want to talk about with you.

…the truth is the government has vowed to do whatever they can to get guns out of the hands of people who shouldn’t have them.

But, YOU know what that means?

— With the liberal left…..threatening your freedom at every turn choosing to carry a knife rather than a gun for self-defense is a great option!!!

IMAGINE….. the freedom you would have carrying the “Cold Steel Gladius Machete.” A weapon that bears resemblance to a short Mainz-style gladius from the time of America’s Civil War.

Wade Hampton III, leader of the Confederate cavalry allegedly killed 80 black bears using only a knife. He would corner the bear, make it charge then dart to the side and stab it in the heart.

Now….that’s a weapon any God fearing soul should have on their belt. And in your Arsenal.

This is a wicked blade that can clear brush as well as most South American style machetes, and would probably be very effective for discouraging unfriendly locals if discretion was required or in the absence of authorization to use your gun.

There’s a very simple reason why you should have a big knife?

Big knives get the job done!

Big knives are scary. And they have the fear factor!

—– The impressive 1055 Carbon steel and that classically inspired handle along that wicked 19” blade will make even the bravest of bad guys think twice before stepping up to cause you and YOUR FAMILY harm —There’s a comfort in that.

There is a reason the Romans, the Celts, and the Greeks (among many others) used blades just like this/similar to this for thousands of years.

It is not too short, not too long, incredibly thick to prevent sheering/breaking during actual battle and the 1055 steel is about as strong and useful as it gets (minus the rusting issues, which is compensated with a black, anti-corrosive finish).

The legendary Jeff Cooper, Gunsite Instructor and the Father of modern tactical handgun shooting once remarked that he would rather carry a hatchet than a “Mouse Gun” for SELF DEFENSE.

Cooper knew that when examining your self defense options with honesty you must evaluate the limitations as well as the potential of every tool in your arsenal.

5 ***** Best sword that I have bought! Razor sharp. Used for sparring & fight practice. Ball on the end of the hilt will cause bruises for the first little while, but then you get used to… Read more

5 out of 5 starsGreat deal for the price

5 ***** Great deal for the price. It is made out of 1055 steel so it should last forever if all you are doing is clearing brush. This tool should not be used for chopping wood.

5 ***** I personally use this as my beside protector. I have other swords and knives, but this thing feels like it could go into battle without wearing out my arm. Perfect size and weight for a one handed weapon. I did have to grind off a few burs from the edge, but no big deal.

5 ***** This is by far the best “bang for the buck” blade I have ever bought. It’s full tang, feels solid and is super sharp out of the box. I do NOT recommend it for prying as it is built for stab/slashing; however, it is a WONDERFUL blade and I HIGHLY recommend it to anyone looking to add to their collection or impress their friends on a camping trip. 5/5 – would purchase again.

This is truly the most revolutionary “Big knife” in the market ever to be offered to millions of fellow Americans. It works better than any knife ever built. The scabbard is sturdy nylon reinforced with rivets and plastic, and it’s rigid enough to work well. This gladius, like most other machetes, is not an urban breaching tool it slices, cuts, and stabs through most animal and vegetable material something fierce. The balance on this sword is closer to the hilt than it is on most machetes, resulting in a weapon that is balanced more like a traditional short sword and is livelier in the hand than any machetes that were ever made simply for clearing brush. This is a fighting tool! And it’s everything you’ll ever need in a knife.

Right now, for a limited time, I’m making a special promotional offer. I want to get this revolutionary knife to every law-abiding citizen to add to their arsenal.

Cold Steel Gladius machete and weaponry of this kind, produced in limited quantities, usually sell for $250 to $300. But you’re not going to pay $300 for the “Gladius machete.” In fact, you won’t even pay $250 for this rare and powerful knife.

If you ACT TODAY, you can take advantage of my limited-time, introductory offer and get this revolutionary knife “Gladius machete” for only $29.99.

BUT please, you’ll have to take me up on it immediately. I cannot promise to hold this price for long. When the inventory runs out, this offer will be over, and the next batch of inventory will be at the full price of $74.99. So, if you act today, you can save an amazing 60% of the regular price.