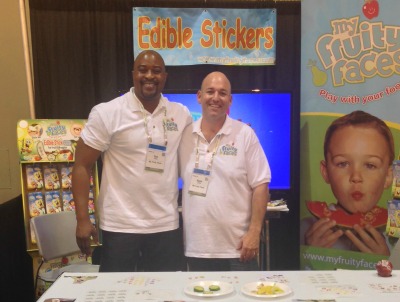 KidXecutives of My Fruity Faces Pitch to ABC’s Shark Tank

(Altadena, CA) Is that blood in the water? Because the sharks are circling and they want a take a BITE out of My Fruity Faces All-Natural “Edible Stickers”. My Fruity Faces has invented the first All-Natural Edible Stickers for real fruit and veggies to encourage kiddos to eat more produce. The CEO and Founder Bob D. Ntoya and COO Adam Gerber will be making a pitch on ABC’s Emmy award-winning show, “Shark Tank”.

In today’s health conscious environment parents are demanding healthier food options for their children. They are seeking snacks that are “as close to the whole fruit or vegetable as possible,” and rewarding retail brands that offer fruit and veggies packaged as fun snacks. Major retailers like Wal-Mart and Target are striking distribution deals on everything from olives packed in snack cups to freeze dried fruit, and Disney and other companies, including Nickelodeon and Sesame Street, who have come under fire for licensing their characters to junk food campaigns, are aggressively looking to partner with companies selling snacks made from fresh fruit and vegetables. According to Advertising Agencies, “Retailers can’t seem to get enough of this new wave of healthier fruit and veggie snacks.” Bob and Adam will get their chance to see if their Edible Stickers turn the Sharks into believers’ when they put their invention to the test in front of millions of viewers during primetime on Shark Tank.

“This is an opportunity of a lifetime, very few companies get an opportunity to get on television let alone pitch to the Sharks on “Shark Tank”, says Bob D. Ntoya CEO and Founder. The KidXecutives will give their pitch in the tank on April 29, 2016. This is set to air on ABC Channel 7 at 9|8 central.

So, what are “Edible Stickers”?

My Fruity Faces are deliciously flavored ALL-NATURAL EDIBLE stickers designed for application to your kids fruits and veggies to make them fun, exciting and engaging! They are a moisture sensitive product made of completely all natural edible ingredients and when placed on fruits or veggies they absorb moisture and dissolve into the food. There are various stickers of full faces, face-parts, and accessories that make fruit and vegetables fun for children of all ages

My Fruity Faces was started by a couple of Dads who were inspired by their children to solve a problem they were having along with many parents all across the country “how do they get their kids to make healthier eating choices during snack time”?

Inspired by children for children, the Dad’s reasoned if cartoon images can help the process food industry sell more cookies, chips, and ice cream, why not take the same approach and use it for healthy eating with real nutrient-rich fruit and vegetables. That’s when they had the idea of My Fruity Faces the “All Natural Edible Stickers” which make eating fruit and veggies fun, exciting, and engaging for kids.

Until now, most parents believe that getting children to adopt healthy eating habits is on a par with achieving cold fusion. My Fruity Faces was created to be the link between healthy eating and an active lifestyle among children. Several studies including a Cornell University study shows pairing fruit and popular cartoon characters increase consumption of healthy eating.

My Fruity Faces offers “All-Natural Edible Stickers”, to help kids develop healthier eating habits with our 100% American-Made “edible stickers” kids now enjoy eating fresh fruit and veggies. In fact, our stickers are just the ticket to encourage your kids to make healthier eating choices……Pssssst just don’t tell the kids!!! The best part is the more they play with My Fruity Faces, the more fruit and veggies they consume.

With over 60,000 applicants Bob and Adam feel extremely fortunate to have been chosen. Season 7 of Shark Tank has been the biggest season yet with an average of over 6 million viewers per episode.

“I was in San Diego at a marketing conference when I got the email that our show would be airing. I was absolutely speechless. We are so excited and feel extremely grateful to be in this position.” Says Bob D. Ntoya.

My Fruity Faces “Edible Stickers” are available online at (myfruityfaces.com), on Amazon.com, in select Wal-Mart locations in Southern California and are expected to be in over 3,600 Wal-Marts nationwide by the end of the year.

My Fruity Faces, LLC was founded in 2010 and is owned and operated in Altadena, California. My Fruity Faces’ mission is to “Give our children the gift of health by inspiring kids to eat healthy and be more active”. Follow My Fruity Faces on Twitter, Instagram, and Facebook.